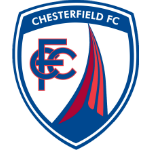 Please note that we are not live streaming tonight's match, however Spireites supporters can keep up to date with the latest goings on by following our Twitter feed below.

Goals from Delial Brewster, Jordan Sinnott, Ricky German and Kristian Dennis made it three wins from three pre-season friendlies for the Spireites.

The result meant that the Spireites picked up the G F Tomlinson Group Cup and head to their pre-season training camp in Spain in fine form.

The academy graduate’s cross found its way to Charlie Wakefield, who laid the ball off to Brewster who took a touch before seeing his left-footed shot blocked inside the six-yard box.

Moments German played in Scott Wiseman down the right, whose pull back found the former Everton man who shot wide from ten yards out.

Brewster came even closer in the 17th minute when he latched on to Jerome Binnom-Williams’ deep left wing cross, this time he took a touch before hitting the side netting.

Sam Hird then saw a header well saved by Budtz after Maguire’s cross, before Brewster finally got his goal.

The striker rose highest at the back post to head Binnom-Williams’ fine cross down and through the legs of Budtz in the 27th minute.

Ricky German then made it three in three pre-season games, when his shot from the edge of the area deflected past Budtz into the left hand corner.

Manager, Gary Caldwell, once again fielded a different XI in the second half with trialist Vincent Dorel between the posts.

While the new XI saw plenty of the ball they were unable to fashion any clear cut chances, that was until the 67th minute when Dennis added a fourth.

Good passing in the Buxton half saw Gozie Ugwu advance, he ran to the edge of the penalty area before laying ball off to Dennis, who curled a fine effort past the goalkeeper with his left foot.

Dennis came close to fifth when he latched on to Reece Mitchell’s pass, firing just over the ‘bar from 18-yards out.